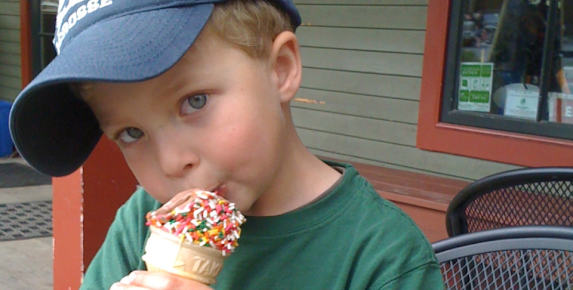 Food is an issue that’s fraught with trouble from the moment a baby is born. It’s constant decisions : what will you feed them? When will you feed them? Do you or do you not have a problem with the powdered cheese in the mac and cheese box? Does it make you a better person if it’s Annie’s Organic instead of Kraft?

Because eating is (at least for many of us) a major social activity, other people’s habits and opinions often bump up against our own when it comes to kids and food. Friends have their own ideas. So do the people at the restaurant near you, your neighbors, your parents and anyone else you run across. It’s a minefield. On this note, I have decided to share my list of the top five food-related things that none of us should ever say.

1. “My kid eats whatever I put on the table.” Mine does too, as long as what I put on the table is pasta with butter and raw bell peppers. Yours is eating sushi. Fine: you’re a better parent than me. Hush up about it. (I’m putting this first on the list on purpose. It drives me bonkers.)

2. “Would you like some chocolate milk/ice cream/giant chocolate brownie?” The best waiters and waitresses will discreetly ask parents whether it’s ok to offer something like this. The worst ones go straight to the kid, setting you up for either a late night sugar meltdown or a five hour conversation about why he or she couldn’t have whatever the ridiculous treat was.

3. “I can’t believe anyone would give their kid X.” I promise you: saying this is a guarantee that the person you’re talking to regularly gives their kid X, whether it’s innocent-looking juice boxes or a jumbo-sized Fun Dip. And now your foot is stuck way too firmly in your mouth for any simple retraction. Just keep quiet and let people enjoy their Fun Dips.

4. “X is yucky.” Truthfully, I’m a pretty picky eater myself. There are plenty of foods that I don’t like. But with a few rare exceptions, I don’t let John know about it. If I do, then I’m arming him with a strong argument about what he doesn’t like. If it’s ok for me not to like broccoli, then why should he eat it? And that goes for pretty much any grown up with any food. So let’s all keep pretending we like everything until the kids are 18 and are off eating pizza in a dorm somewhere.

5. “Three more bites.” Somewhere along the line, I told John how many bites of something he needed to eat. This was a huge and terrible mistake, and I would recommend that no parent ever use a number of bites as incentive to keep eating. Because now it’s the standard by which unfamiliar dinners are measured, and that takes away from the real joy of just eating food together. It’s not a meal, it’s a negotiation. If you haven’t already opened this terrible line of discussion: don’t. It’s too late for me, but it’s not too late for you. Save yourself.

Are there others that I’m not thinking of? Add to my list.