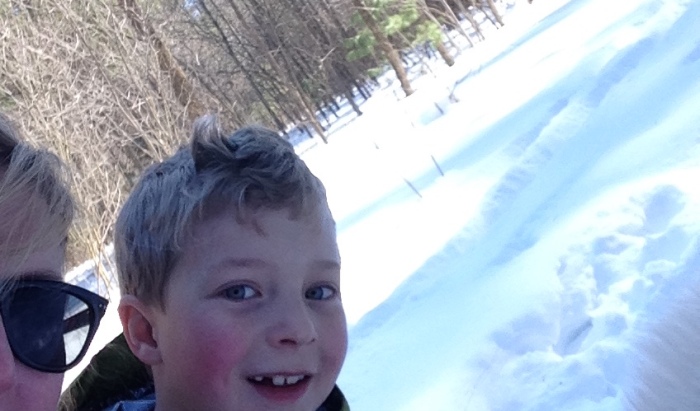 John and I went for a hike on Saturday in a park near our house. By hike, I mean “hike.” Essentially we went for a walk in the woods.

It was a relatively warm day — temperatures in the 20s instead of the single digits and teens we’ve had for most of this winter. The trail is very well marked, and very well used. We didn’t need snowshoes thanks to all those who had come before us. But we were far enough from people and cars that you could stop and hear nothing at all. We spent a good bit of time goofing around in the snow. We pretended to be explorers, and Tom was the scout. The scout was very easily distracted by sticks, smells, and snowbanks. This walk was one of my favorite things about winter so far.

When we were getting back to the car, Tom was still full of beans but John and I were both weary. I can’t help thinking that the 20s is still cold, and if anything had happened to me or happened to John, we’d still have been pretty far out there. It’s not the end of beyond (and cell phones work) but it’s cold, we’re alone, and that’s enough to be careful.

Lesson for the day: it’s great to be out in the world, but at least for us, not too far out. I’m happy we live here in Middlebury where there are plenty of walks that fit the bill.

One thought on “Into the (only slightly) Wild”