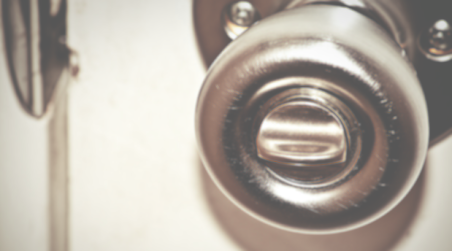 I don’t remember very clearly how I ended up in this situation. I’m sure he said something clever like “Oh, I have to play this song for you,” and I’m sure I liked the attention. I’m sure I wasn’t sober. I’m sure he wasn’t either. Not that it makes any difference.

Once I was in this room and the door ended up locked, I do remember — quite clearly — that I wanted out of there. I didn’t make a scene or raise my voice. I didn’t beat on the door. He didn’t have his hands (or any other part of his body) on me. But he was between me and the door. I kept saying, “I want to go.” He kept saying, “Stay.”

A hundred bad things might have happened after this, but they didn’t. Nothing bad happened. Instead, my friend broke through the door. She didn’t knock or hesitate. She broke the door — I don’t know how — and came in. Completely ignoring the boy, she held out her hand to me and said, “Let’s go. I thought you would want to go.” I took her hand, and we went.

We laughed about this for years afterward… “Remember that time you broke down the door to come get me?” Except, looking back, it’s not funny.

I’ve been hearing and reading so much about sexual assault lately, and I’m just hoping it’s not a trend in the news that will pass away to make room for the next big thing. I can’t imagine that there aren’t hundreds of stories that started out like mine among the women that I went to college with. Many that ended differently. Then multiply it times every other college or city or town. Big problem.

In a perfect world, a girl or a woman wouldn’t have to worry about being pressured or harmed if she agrees to go upstairs or step outside or come along to the next bar. And making any of those decisions certainly, certainly doesn’t put her at fault if something does happen. Nothing a woman can say, do, or wear justifies a crime against her.

But we don’t live in a perfect world. I often find myself thinking that while all of the above is true, by the time the something has happened which is not that woman or girl’s fault, she has already been hurt. Being innocent of blame doesn’t take that hurt away.

So I wish I could say to every woman — look out for each other. Be vigilant friends. Be a watchful eye when someone else is making risky decisions. Leave with the people you came with. Raise your voices. And if necessary, break down doors. It won’t stop every assault from happening, but I’d rather more people had friends like mine, and happier endings to their stories.

One thought on “Take Care of Each Other.”