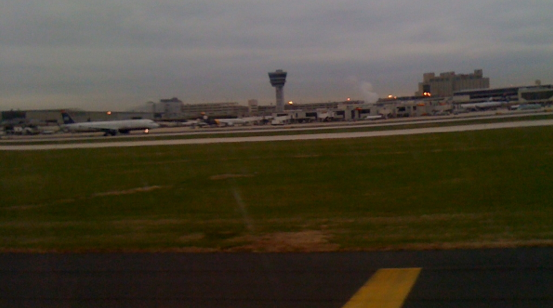 I have a theory that when you’re flying to Vermont, you don’t actually need a gate number. You just need to know what to look for. After a decade of flying into BTV, this is what I believe you can expect:

1. A minimum of three silver-haired gentlemen in very sharp “business casual” attire. They are semi-retired, have moved up here from NYC or Boston, but still go to the city a few days a week.

2. Two stout ladies at the hard end of middle age with short gray hair. Possibly they’re a couple, possibly not. But they’re dressed similarly and look like they have been dressing similarly for some time now.

3. An original hippie. I don’t mean a 20-year-old who’s away from home for the first time. I mean someone who may very well have been at Woodstock in 1969 and hasn’t cut his or her hair since.

5. At this time of year, at least one skiing family. I usually think they’re flying in from Philadelphia, New York, New Jersey, or similar. They’re dressed to the nines, speak loudly, and think the Burlington airport is “cute.”

6. Skiing families may be interchanged with people who work for Burton. You can recognize them because they’re dressed in Burton clothes, carrying Burton bags and usually talking about Burton.

7. Three or four French Canadians. I like to sit near them because I don’t speak french but I think it sounds lovely. They’ve parked their car in Burlington and will drive back to Montreal tonight.

8. Someone I know. This doesn’t help you if you’re you, but it helps me, obviously. Vermont is a pretty small place, and you’d be surprised how frequently there’s a familiar face on the plane.

If you have to narrow it down to just one thing: check the shoes. On a flight to Vermont you will see a larger than average number of people wearing shoes that will allow them to walk straight out of the airport and up the side of a mountain. Or else clogs.

And that should do it. If you can’t locate the BTV gate with all of that information, then I can’t help you. You should be more careful with your boarding pass.