I can’t very well purport to have a blog touching on small town living in Vermont without saying something about the Fourth of July parade in Bristol. We spent this morning on friends Pam and Reinhold’s front porch, as we’ve spent just about every July 4th since we moved up here. The parade is at once fun, funny, good-hearted, random and occasionally a little too much. Just like real life. Best captured in photos:

The Bristol parade seems to include every fire truck in Addison County. I do worry about what might happen if there was an actual fire somewhere. 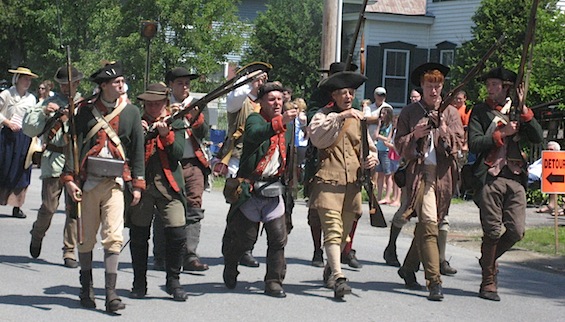 Some reenactors—in their wool uniforms on a hot day. Somehow one of these guys ended up in the yard later leaning up against a tree and looking wounded. I think he was just hot, but it was a little disturbing.

Of course it’s not an event in Vermont without someone reminding us to eat local. These guys were throwing carrots to the crowd, which was not as popular as the candy that other folks had to give out.

I don’t know what they do in their real lives, but in parades they call themselves the Blues Brothers, or something along those lines. My favorite part every year.

And here was a kid playing the banjo on the back of a float that had a greenhouse and a planted garden on the front. Who could make that up?

The parade always includes a few things on the stranger side. This year there was a float combining a party barge concept with Noah’s ark, and I’m not sure why. There are always small horses and those little Shriner cars. Actually anyone with an interesting car of any size seems to be able to join in. I think we were actually in the parade for about a hundred yards right at the end, thanks to a quick right turn from Matt. It’s very democratic.

In my opinion, any event that attracts large numbers of people in hot weather (some with not enough clothing for good coverage) can have its downsides. But this parade is a real small town, community event that brings out all kinds of people. Rich and poor, old and young, big and small. We’re always happy to join in.

One thought on “Happy Fourth!”