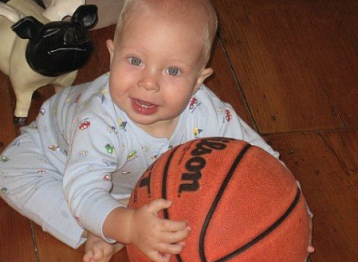 We have these pictures of John on his first birthday, clutching a basketball like it’s the most important thing in the world. It’s almost the same size that he is.

Since that time, I would estimate that he’s spent roughly three zillion hours dribbling, shooting, and doing his own public address announcing for games in our driveway or in his room. Unlike other kids who imitate LeBron James (or whoever in NBA – I have no idea), John has pretended over the years to be Ben Rudin, Andrew Locke, Ryan Wholey, Ryan Sharry, Nolan Thompson, Jake Wolfin, Joey Kizel, James Jensen, Dylan Sinnickson, Connor Huff, Bryan Jones, Jake Brown, and Matt St. Amour, his heroes on the Middlebury College basketball team. He’s watched approximately nine million hours of Middlebury basketball in person and online. He’s worn his hand smooth giving high fives to the team. He’s been a basketball fan from the start, and from the heart.

Yesterday, John finally, FINALLY got in the game. His very first team — coached by his dad — had their very first match up against the fairly intimidating Vergennes Thundercats. They won! Final score: 12-4. Honestly, I think John would have had a pretty great day no matter how the game turned out. It’s just so exciting to finally have a turn to play.

One thought on “In the game, at last.”