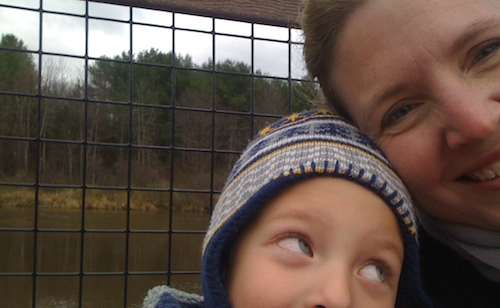 Lots of people have asked me if I’ve told John anything about multiple sclerosis. Yep, he knows.

I wasn’t planning on telling him, but right after the diagnosis I had to get IV steroids at the hospital every day for five days. It took several hours a day and I had crazy bruises all over my arms. I also was feeling sick from that stupid lumbar puncture and had to stay horizontal for about a week. So the cat was out of the bag in a couple of different ways.

John asked Matt what was going on, and when Matt tried to dodge the question, he kept asking. “Why does mom have to get medicine that makes her feel worse when she was feeling fine to begin with? Why is she at the hospital? Do you know? Do you really know and you’re just trying not to tell me? Why are you trying not to tell me?” (John would annihilate anyone on the witness stand. Contributions to his law school fund will be accepted starting immediately.)

He knew I’d had “pictures of my brain” taken the previous week. We told him that the pictures they took showed that there were little spots on my brain, which means I have a kind of sickness. But not one that he can catch, and not one that makes me feel bad. We told him that a long time from now, it might make it hard for me to do some things that other people can do more easily. He said, “Like walking?” Yes, like walking.

Then he asked if we could get canes for special occasions. For example, an orange cane with black bats on it for Halloween. Red and white striped for Christmas. With sparkles for fourth of July. Canes for all occasions. I told him that would be great.

And that was it! The subject hasn’t really come up since. Kids care about what impacts them right now, and this doesn’t. Hopefully it’s not going to be impacting me anytime soon either. If/when that day does come, we’ll tell him more. Or (hopefully) he’ll be 35 years old by then and he can just read up on it himself. And buy me some candy colored canes.