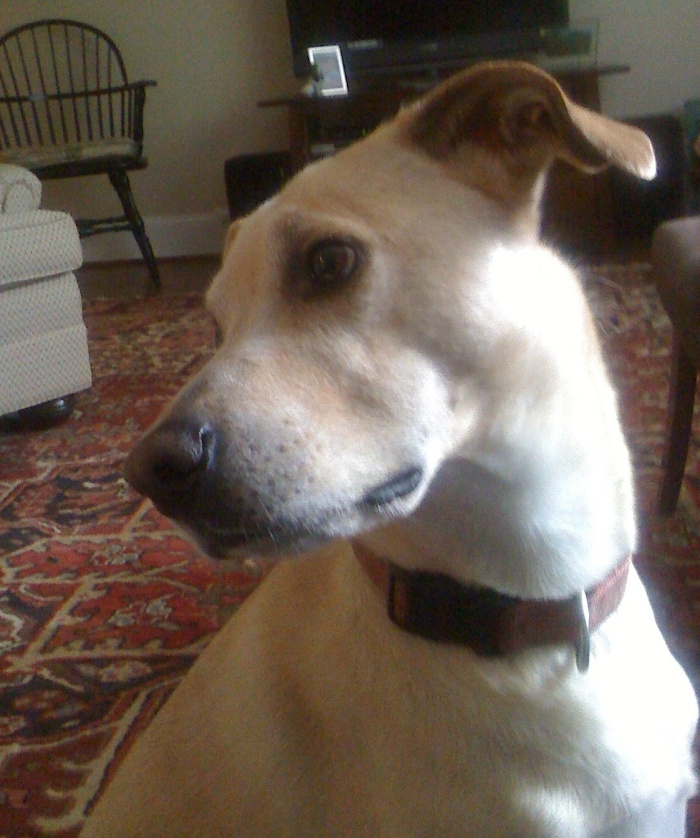 This week, my family is all spread out. I brought John to North Carolina, Matt stayed in Vermont, and now John’s with my parents in South Carolina. I’ve been looking forward to this week. It’s been a long, long while since I had some time to myself in a home (not a hotel) with nothing but two big dogs and a very round cat for company.

Now that the moment has come, I find that I’m not all that excited. I’m actually a little sad about it. And I think the dogs may have some concerns as well. Tag usually looks more cheerful than in the picture above.

I would have been more excited nine months ago, before I started traveling more for work. At that time I was genuinely starved for free time. I never had time to read. I felt like I was never not in charge of dinner or whatever else is going on at home. The sense of having a constant to do list was a little relentless, so when I did travel, it was with a sense of guilty relief. I would hole up with a glass of wine and relish the grown up conversation.

This year, my guilt/stress/baggage has subtly shifted in the opposite direction. I’m away more. I missed the kindergarten concert at the end of the year which just killed me. (Video is not the same.) And I don’t have very much vacation time right now, so the things that I used to be able to do — just taking an afternoon off to hang out or play or go on a field trip — I can’t do anymore. This is giving me a case of the blues.

I don’t have a solution to this. I work (which is something I want to be doing), and this is how work works. But here’s the worst part: I think John’s used to it. He used to throw a tantrum after I’d been away. Now my coming and going is routine. I didn’t love the tantrums, but does the lack of tantrum imply that having mommy away is no problem? It isn’t a good feeling to have your kid be used to your absence.

Anyway. This week I think I’ll read more, get more work done than usual, hang out with my sister, catch up on some sleep. I’ve been meaning to reformat this blog, so maybe I’ll finally get around to that. Those are all good things. And honestly, 90% of the time, the travel and separation are ok, whether it’s me leaving or (for the first time) John leaving. But for the moment the quiet is a just a little too quiet.