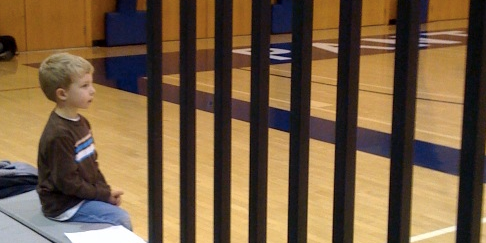 We haven’t jumped on the bandwagon quite that quickly but after five and a half years, we’re suddenly in full swing. John just started basketball, skiing and (beginning next week) swimming. I think his lessons are teaching me something as well.

First of all, I’m not as laid back as I’d like to think. I meant to be relaxed and hands off, but I’m very hover-y when it comes to these outings. I’m not physically intruding on John’s space  but my whole heart is out there with him – on the court or on the slopes – and I almost hurt from my hopes for him. I hope he’ll have fun. I hope he’ll do well. I hope no bigger kid hurts his feelings. I can’t take my eyes off of him – trying to interpret every expression and experience. Am I a helicopter parent? Possible.

Second, I’m standing on the sidelines projecting all my issues onto him. The other week at basketball he lost his group for a second. He went to the left and they went to the right, and it took him a minute or two to figure out where to go. Because, as a child, I would have been paralyzed by awkwardness in a situation like that, I was stricken with those same feelings when it happened to him. In fact, he was completely fine. He told me the story about it later and just explained the clues that he used to find the right group.

Third, Matt and I have a huge influence over John, and we have to be careful with it. He took his first ski lesson when it was about 4 degrees outside: just ridiculously cold. But because Matt and I acted like this was not a big deal and the temperature was no reason not to give it a try, John didn’t think anything of it either. Had we worried about it in front of him, I know he would have suddenly been too cold to go outside.

I was a pretty timid, shy and easily embarrassed kid, but John isn’t. He’s logical and thoughtful. He isn’t reckless, but he is confident and brave in his way. He doesn’t need me giving him my anxiety or concerns. Does this mean that I’ll stop having them? Will I ever stop holding my heart in my throat when I watch him march off into the world? Definitely not. But I will try to keep my crazy to myself.