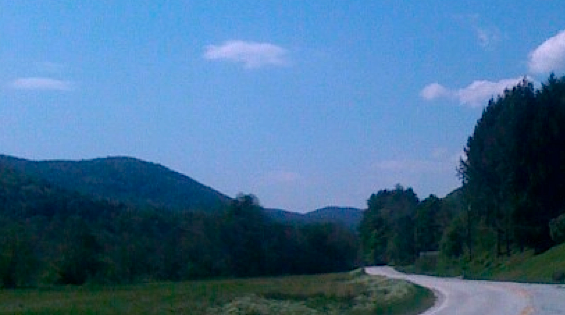 Last weekend, my good friend Laura came to visit at last, and we spent some time driving around appreciating my adopted state. Vermont rose to the occasion with blue skies, rolling green hills, and white church steeples all over the place. Show off.

As we drove, Laura and I talked about the fact that Vermont seems to have a special place in our collective imagination, even for people who’ve never been here. Certainly other states evoke a certain quality or image (Texas: big, California: sunny), but Vermont’s reputation seems to resonate particularly strongly. Matt and I always laugh at all the Vermont references in movies and on TV shows. Here’s a sample:

Home of country inns and country people: Vermont is where the Newhart show was set, for example. (“Hi, I’m Larry, this is my brother Darryl, and this is my other brother Darryl.”) In fact, the inn they used in the credits is not far from here. Bob bravely deals with all the quirks of country life.

Refuge from the big, bad city: In “Baby Boom” and “Funny Farm,” Diane Keaton and Chevy Chase need to leave their jobs and their city troubles behind and find some peace and quiet. Where do they go? Vermont! To write books and make applesauce. With hilarious results, of course.

Escape from your worldly woes: Just last night we watched a movie (apparently based on true events) where the soon-to-be-loony protagonist and his soon-to-be-missing wife open a health food store in Vermont. Viewers are left with the impression that if they had just been allowed to stay up here, everything would have turned out ok.

Good for mental health: I liked it when, on the TV show “24,” the bad president kept threatening to send his mentally unstable wife “back to Vermont.” The implication being that she’d been here before to get right in the head, but that it was not a place she’d want to go again.

Last holdout of civilization: In the Will Smith movie, “I am Legend,” a band of hearty survivors has built a big wall to keep out the zombie/vampires/creatures (whatever they are) and start a tiny new society. Naturally, they’re starting it in Vermont.

Of course, the depiction of backwards country folks like Larry and the Darryls is completely over the top. It’s comedy after all. But if what Vermont evokes for people is  country roads, beautiful views, and a sense of peace and remove from the chaos of the wider world, that’s just about on target. So if you’re losing your job (or your mind) or being pursued by vampires, you know what to do. Come on up to Vermont, and be sure to stop in and say hello!

2 thoughts on “Just Who Do You Think We Are?”